Somewhere deep in the heart of every drag racing fan, reporter, or crewmember is a dream of maybe someday driving a race car themselves. For most it’s just an idle daydream, figuring that their day will never come. Me, too. I was there, dreaming about setting Low E.T. and winning races and swearing that I could show ’em all if I ever got the chance. Well, I finally did …

Vacations come so seldom here at National DRAGSTER, and summer vacations are almost unheard of.  Drag racing really seems to pick up the pace around that time of the year. So, it was much to my surprise that I was granted a two-week sabbatical from my typewriter at the end of July for a little extra curricular activity.

But somehow, heading for the guardrail of Norwalk Raceway at 100-plus miles per hour wasn’t on my original vacation itinerary. Strapped securely inside Frank & Linda Mazi’s supercharged BB/Altered Opel with the motor singing a high rpm tune, (and with Frank and Linda in near coronary arrest on the starting line) discretion kicked valor right in the teeth and I backpedaled and steered right.   The car responded by straightening its errant course and I responded by putting my firesuit-clad boot back into the loud pedal and screaming toward the finish line — step back “Wild Willie” Borsch, you’ve got nothing on this kid!

No, this is not a segment from a dream.   Yes, it really happened.  And yes, I was plenty concerned.  No, I’m not crazy. We planned it this way.

And what a crazy plan it would seem to have been.   You’ve seen the Mazi’s gorgeous red Opel at many national events — it’s plenty hard to miss. You may have even seen it on the cover of DRAGSTER back in May with an article by yours truly gracing page 3.  Little did I know, but that article would soon put me behind the wheel of the car I had written so glowingly about.  Well, during the course of that interview, Frank suggested that I might do well to take a ride with him on a full-out quarter mile blast … after all, the car was equipped with a passenger seat and an extra set of safety harnesses.  All I would have to do was scrounge up a firesuit and buckle in, right?   Wrong, Stone-Woods & Cook breath!

We had forgotten page 146 of the current NHRA Rule Book: “No More Than One Person Is Permitted In Any Car During Any Run, Except ET/Street Racing, 14 Seconds Or Slower.” Since the Mazi’s 8-second car hardly qualified as such, it was “No Way, Jose,” or as NHRA VP/Safety Carl Olson said, “You’d have more a chance of driving the car than riding in it.” To which I replied, “Yeah, sure. And I’d have a better chance of flying the Space Shuttle than ever driving that car!”  As things turned out, I should have mailed off a letter to NASA.

At the time I was crushed. The Mazi’s, too, seemed unhappy … it would have made a great article.  Still, I was honored that Frank offered me the ride … I had no idea that there was more to come.

So, there we were at the Molson Grandnational, bemoaning the fact I couldn’t take a ride, when Frank sprung this gem on me:  “Well, since they won’t let you ride with me, how would you like to drive the car?”  Sure Frank, you’re gonna let me, a 24-year-old writer that you’ve known for less than six months, drive your car?  Your pride and joy?  Your ego?   C’mon, quit pulling my leg. “He’s serious,” said Linda, pulling me aside. “He wouldn’t have offered if he didn’t mean it.  He’s never offered to let anyone drive it before — you should be honored.  He must really trust you.”

What do you say to a guy that’s just offered you a chance to drive one of the most awesome drag racing machines ever built, “Sorry, I’m busy that week”?   If you were me, you’d have stared Frank right in the eye and, with voice cracking slightly, whispered, “Sure.”  Daring to tread where no wise man has been before.

I mean, hey, what’s the problem? I’m not the first automotive journalist to ever drive a race car. Compared to Jon “I Drove A Funny Car On Fire” Asher, Phil “Jet Car” Elliott and Pat “Indy 500” Bedard, this should be duck soup … hey guys, the car only goes 170 …

But wait a minute.  Isn’t this the same car that crashed into the concrete Christmas Tree protector at the Sportsnationals a few years back?  Isn’t this the car they used to call “God of Hellfire?”  The same one that’s crashed three times and been in more safety catch nets that The Human Cannonball?   So what!  Mazi (it rhymes with crazy) says he thinks I can do it … he thinks that I have the right attitude (based on my story) and I have two weeks vacation coming my way.  Besides, I don’t scare easily.  I drink Diet Pepsi even if it does contain Saccharin that has been determined to cause cancer in laboratory animals.  I live life on the edge.  Danger is my middle name.

The bravado flowed easy.  After all, this thing couldn’t possibly come off … there were too many things that could go wrong. The car would get stolen, it could rain for four straight months in Ohio. Frank could come to his senses, the flow of racing gas could be cut off, etc., etc.  I was fairly confident it wouldn’t come off.

My vacation announcement met with mixed reactions from my co-workers, most of them however bordered on the incredulous.   Here’s a sample:

Me: See ya in a couple of weeks … I’m going on vacation.

Them: Really?  Where ya goin?

Them: Oh … Cleveland.  Going to see your folks?

Me: Nope. I’m going to drive the Mazi’s BB/Altered and get a Competition License.

Them: Okfine.  Been nice knowin’ ya …

Obviously, an undertaking of this magnitude is not going to be accomplished for free, so we had to turn to the help of some NHRA Major Sponsors and other people for their assistance.

If the plan went according to schedule, the only things we hoped to use up were tires and gasoline. Obviously, I couldn’t afford to put up the money for a set of slicks to replace the wear and tear I’d put on the Mazi’s new set, and with the amount of runs I was figuring I would need in the car before a good run.  I figured that the old fuel bill would be plenty high.  Not wanting to force this monetary predicament on the Mazis (they were, after all, rooming me and feeding me at their house in Eastlake) I turned to others for help.

Goodyear’s Racing Tires Division Field Manager John Slikkerveer was first on my list, and after a brief explanation of the project to John, he agreed to replace the set of slicks currently on the car with a fresh set of the 32 x 14.5 x 15 rubber. Naturally, when it comes to fuel the Mazis can’t just zip down to the local Chevron station and fill ‘er up with Supreme, and the voracious blown Hemi requires 118 octane racing gas.  Scanning the list of NHRA Major Sponsors we found that VP Hydrocarbons, the Mazis usual brand, could probably help us.  We quickly had VP’s John Morrison on the phone and within hours a 55-gallon drum of their C-16 racing gas was on a truck heading for the Mazi’s house.

The last item on the list was safety equipment for me, since I owned no firesuit or other protective wear. This was an easy choice in Simpson Safety Equipment. Not only does ex-DRAGSTER Ad Manager Chris Hawley help run the Simpson advertising work out of McMullen Advertising, but he is also a close friend and constant video game opponent.  However, much to my dismay, I learned that there is really no such thing as an “off the rack” firesuit, and that Simpson would have to measure me and then have the suit custom ordered … a three-week wait.

Well, by this time I didn’t have three weeks to wait, so I put out the word to several racing friends of my needs and size, and the Mazis did the same. Simpson, however, was able to provide me with a Model 92 carbon fiber helmet (in Mazi Red of course), a fireproof head sock and some fireproof driving footwear.  The suit turned out to be easier to get than I expected, as long time Mazi friend and T/AD driver Butch Osmon was just my size and agreed to loan me his Simpson suit for as long as I needed it.

As my departure date drew near, it became increasingly obvious that it was, heaven help us, going to happen. This led me to interesting discovery of what I will call Burgess’ Law No. 1: The amount of bravado is exactly proportionate to the proximity of the event.  Or, to put it another way, I was getting nervous. But strangely excited too.

D-Day arrived early one Friday, and by Friday night I was winging into the Cleveland airport for my appointment with destiny. The Mazis were there on time (I wasn’t) along with good friend Dave Mackovjak (they just call him “Mack” — it’s plainly evident why). Then the airline promptly lost some of my luggage … we were off to a great start.

At this time I think it would be appropriate to introduce the main characters in the adventure, most particularly the Mazi family: 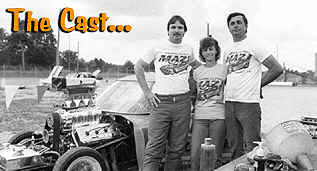